PLEASE NOTE: Due to the current restrictions for Covid none of our classes are running at the moment.

Practical Karate training will restart on May 17th.

MAX Impact training will restart on March 29th using an outside venue.

A Guide to Pad Holding for Practical Karate

There are many types of impact equipment that could be used in training. No one piece of kit can do everything but some are more popular than others. This guide will apply to the majority but will be using focus mitt and kick shield as examples.

A versatile piece of equipment that can be used for a wide range of strikes with pretty much most parts of the body, great for combinations and doesn’t restrict movement. Can come in many sizes but generally are either flat or curved.

As the name suggests, generally used for kicking techniques as they are thick and designed to take heavy blows. Can be used for hand/elbow strikes but combinations are limited because of its size.

To get the most out of pads they need to be held correctly so the striker can get the most out of training without hurting themselves or the holder, a good pad holder can help train timing, distancing and power. Pads should be held in front of the shoulders, elbows down in a braced stance. (fig 1) when a striker hits the pads a slight forward movement is fine but must not slap the attack, you need to give resistance to encourage a penetrating strike. Holding too far apart with no resistance gives no feedback, can cause hyper extension of joints and lead to shoulder injury for the holder (fig 2). Kick shield should be held close to your body with no gap in between (fig 3) again in a braced stance, this is more important for kicking as generally can generate more power than hand strikes so need more resistance. Leaving space between you and the shield means you can’t put any weight behind it so the kicker can’t drive through the pad. In the same way lifting a heavy weight forces your muscles to work harder so do you need resistance behind punches/kicks. Fig 3 is for linear kicks but for circular movements (roundhouse) the shield is held at the side when facing your partner (fig 4), to simulate the target area. 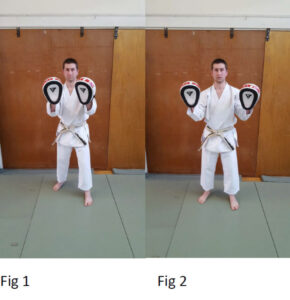 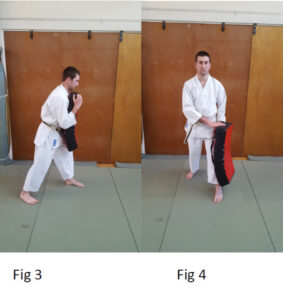 The flaw in using pads is they are not a person, but that’s also the good part. Training with another human means we must pull strikes for safety, even using protective equipment injury can still occur, although pads can be hit regularly without problem, so long as they are held correctly. Using pads can improve technique as it gives positive feedback, for example, poor structure can inhibit power which can be difficult to understand in fresh air. When hitting a pad you feel when it’s good and when it’s not which can aid in learning. Pads also don’t lie, saying X technique will do Y damage is easy as few people are willing to use their bodies as a test, holding a pad isn’t a definitive answer but at least you can feel the impact. Although all efforts are made to imitate a human, for safety it’s not always possible, this is why pad work is only part of a wider training matrix.

On the subject of gloves, for self-defence you should be able of striking bare fist and should practice without gloves. However, using a glove can protect hands from injury, even breaking the skin could mean time out of training, not to mention blood contaminating equipment. The glove should be thin to make a correct fist without supporting the wrist too much, as it can mask mistakes, but thick enough to give protection. Boxing gloves can be useful if you do have a minor injury to absorb some of the impact, but big gloves allow more room for error which you may not get away with in a smaller glove or bare fists. A common mistake being a bent wrist, boxing gloves don’t allow for the feeling you get when doing it wrong.

Pad work has to be done often to get the most benefit, bringing them out every few weeks, doing ten punches each side is not enough. It needs to be given the same amount of training time as everything else to develop power and competence holding pads. Pads holding is a skill all by itself, holding and hitting are two sides of the same coin, if the pads are not held correctly then the striker can’t get the most out of drills. Good pad holding can help develop power, timing, distancing and smooth transitioning between techniques. Karate is an impact heavy system, grappling, trapping, locking, throwing are secondary to striking but doesn’t mean pads can’t be put into these ranges, do not assume because you can hit hard standing up, that it’s the same when you are not. Close quarter combat means touching distance, which means not a lot of space to wind up a big shot, and will often have one arm controlling and opponent. Elbows can generate large amounts of power and be very effective when thrown at the head. Holding the pads tight into the shoulder gives a solid target, allows the striker to be at an appropriate distance and, importantly, is safer for the holder (fig 5). The same holding position can be applied for knees (Fig 6) or using a shield held like fig 3 but bent over more, if hitting body, or fig 4 for legs, although focus mitts allow for more combination. Using the same holding positions demonstrated, hitting while on the floor can still be achieved (fig 7), the goal is to hit explosively without having the same range of movement afforded when standing. The same can be applied to standing using a wall (fig 8). For trapping you may have to change the distance slightly to allow for the focus mitts to be held but being to hit is the trade. 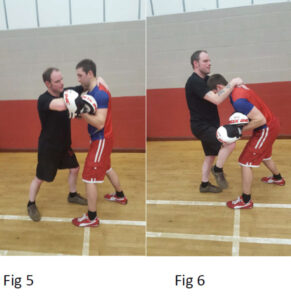 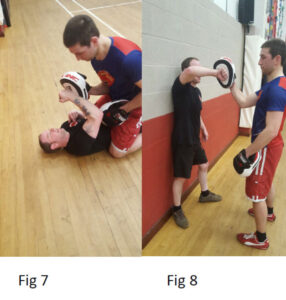 Physical fitness has a role in self-protection, as well as general good health, and there are many ways of getting it. However, most are solo endeavours (running, swimming, weights etc) which can be done outside the dojo to compliment training. Pad-work is a direct application for what is being studied, so why not use it? Set a timer to do rounds, HIIT, tabatta, set repetition are all way to improve cardio whilst making the most of dojo time. Intense training is another way to simulate some of the effects of adrenalin e.g increased heart rate, heavy breathing, blood moving to major muscle groups, and although there isn’t the emotional response being able to function at a high level while in this condition can be difficult. You could do a max effort minute then try to use a phone, put a key in a lock, listen to command or test technique.

Pad work can be used a medium for mental conditioning as well as the physical. A demanding drill that stresses your body to its limits can help build a ‘never say die’ attitude. Keeping your focus when all you want to do si give up is vital for self-protection, it’s the base from which everything else is built on. Fatigue will of course affect performance, a tired body can be a lazy one, mental resilience and good technique under pressure is the ultimate aim.

If impact training is implemented into a wider training matrix it enhances all parts of it, and is only restricted by your imagination.

Our Classes
Where?
When?

We offer classes in various locations in Norfolk. Everyone is welcome from beginner to those with years of experience.
Find a class

The word 'Sensei' is often translated as 'Teacher' but a better translation would be 'One who has gone before'. Read about the paths our Sensei have taken in their own Karate journeys.
Read more

If you are interested in joining our classes or just finding out more about Practical Karate then please feel free to get in touch.
Contact details